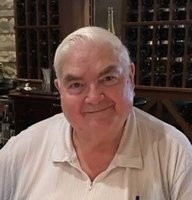 John Patrick Brophy, age 77, born September 4, 1941 in Houston, Texas to Martin and Margaret Brophy, passed away peacefully in his sleep on Friday, August 23, 2019, in Houston, Texas.  John was preceded in death by both his parents.

Having grown up in the Heights area of Houston and graduating from St. Pius X High School, John enjoyed growing up on the corner of Heights Blvd. and 16th St. visiting with aunts and cousins.

John started with Southwestern Bell Telephone in 1962 and was given the choice of being a lineman or work inside the office.  He said he tried being a lineman for one day and decided that the office was a better place for him.  He became a dispatcher for the work crews and everyone enjoyed his assistance with requests for locating them close to where they were finishing for the evening or starting the day off.  This assistance earned him the nickname, “Nice Guy John,” something he would remind you of every chance he got.  In 1992, John retired from Southwestern Bell/AT&T after 30 years of service.

John was also a member of the Seafarers for many years, volunteering at the Houston International Seafarers’ Center at the Port of Houston,

An avid World War II history buff, John often exclaimed, “That’s the way we did it on Guadalcanal,” even though he had never been to nor served there.

John supported various area schools through donations and was extremely proud of contributing to the Sierra Leone-Tupaddy for Education in the development of the country’s education programs.  He was a strong supporter of the United States military and International Partners.

He was also an avid participant in the annual Girl Scout Cookie drive, helping many a girl make their sales quota.

John could often be found working in his shed making wood decorations, ornaments, or yard signs for anyone and everyone who showed an interest.

He will be missed by the Texas Lottery and Coushatta Casino and Resort.

John Brophy was a big man with an even bigger heart and sincerely wanted to help people.