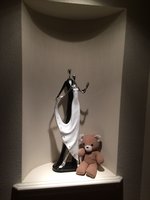 Susan Margaret Long (Longbottom) was born in Dewsbury, Yorkshire, on 9 May 1947, her father was Joe Longbottom and her mother Alice Bould. Her family moved to Glasgow, Scotland, when she was 8. Susan has a sister Kathryn Gilmour, in Glasgow, Scotland; cousin Judith Green (born one day later, also in Dewsbury), in Edinburgh, Scotland; and cousin Mandy Fair, in the Wirral, England.

Since her marriage to Gordon in January 1971, she lived in Ahwaz, Iran; Kuwait; Abu Dhabi; Ahwaz again, then Shiraz Iran; Paris, France; Caracas, Venezuela; San Fernando, Trinidad; Jakarta, Indonesia; Ridgefield, Connecticut; Caracas once more; Houston, Texas; Redwood City California; and Le Lavandou, France. She gave birth to Fionna in the Oasis Hospital in Al Ain, Abu Dhabi in 1973, and to Euan in the Namazi Hospital in Shiraz, Iran in 1975.

Susan died in MD Anderson Cancer Centre early in the morning of Wednesday 9 October. She had been hospitalized since 24 September, with multiple secondary effects of pancreatic cancer compromising her body systems and organs.

Our children Fionna from Los Altos CA and Euan from Concord MA were with us. Cousins Matt & Ann Mowat from Austin TX were also with us for some days.

Right up to Tuesday afternoon we were talking quietly, recalling lovely memories we have all shared around the world, even having a few smiles. In the last week we had several visits from very old friends from our international Schlumberger life. Susan was very pleased.

I have lost my wife, lover, best friend, and constant companion, of 53 years. Fionna & Euan have lost a wonderful mother, supporter and friend, and their children Jacob, Rose, Sean, Lochlan and Harper have lost a loving and fun grandmother. We are all devastated.

For now, we plan no ceremony of any sort. At the appropriate time, we will have a celebration of Susan’s life in several places, likely Houston TX; Redwood City CA; Le Lavandou France; somewhere in UK…

When Fionna & Euan were young, we began sailing, mostly in the Caribbean, in Scotland, and in Queensland. Later Susan & I spent much time sailing on the oceans around the world. We saw many signs of the damage caused by mankind to the oceans and the life in the oceans. Therefore, in lieu of flowers, if any donations in Susan’s name or in your own might be made, she would be pleased if they were made to Oceana (Oceana.org). You can select the country/region at the top left of Oceana’s home page, and then move to the donation page for your country. Alternatively you can search for and select Oceana on this Obituary web page under the Donations menu, it is the first line item, based in Washington DC.