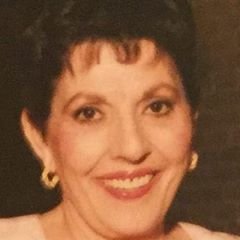 Carol was born in San Antonio on November 21, 1932, and entered her Heavenly home on Friday morning, August 3, 2018, in Houston, TX, after a long and difficult illness. She is preceded in death by her son, Kent Edwards and is survived by her husband of 65 years, Ura L. “Buddy” Edwards.  Her daughters and grandchildren also survive her:  Allison Edwards Smith of Houston, Yolanda Ibanez of Richmond, and grandchildren Michael Ibanez of Schenectady, NY, Davis Smith, Angele Smith, and Amaris Smith of Houston. Carol is also survived by her son-in-law David E.S. Smith of Houston, sister-in-law Vivian Nielsen and niece, Charlotte Humphries, both of Atlanta, TX.

Carol attended San Jacinto High School (class of 1950) in Houston, TX. Carol was always active in many clubs and organizations. Her tenacity and athletic talents resulted in winning the 1950 Texas State Doubles Championship with doubles partner, Dorothy Taylor.  Carol attended the University of Houston and was a member of Delta Sigma (later, Zeta Tau Alpha) sorority and Fiesta Queen in 1951.

Carol met her husband Buddy while attending the University of Houston and they married in 1953. In 1966, the Edwards moved their family near Fulshear, TX, and enjoyed several homes in the country until August 2015, when she and Buddy moved to Houston to live with their daughter Allison and family.

Carol was a dynamic, funny, vivacious, brilliant, and beautiful woman. “BaBa” adored her grandchildren.  She was also known as the MacGyver of the family as she could fix or do almost anything! Carol loved her fur babies and shared this love with many cats, dogs, and horses throughout her life.  Her membership in the DAR and her family’s many generations as Texans were both sources of pride for her.

Carol’s interests were abundant but none was more important to her than her faith in Christ. Carol was a voracious student of the Bible and was especially passionate about the study of the Eschatology.  Her later years exemplified the promises of I Thessalonians 4:13-18. She was always watchful and longed to be raptured with Christ’s church – now, she will experience the end times from her heavenly and eternal home.

Carol’s family would like to thank her doctors, Eduardo Hernandez, MD, and Prasad Manian, MD, for their most excellent and compassionate care during her lengthy illness – she adored you both.