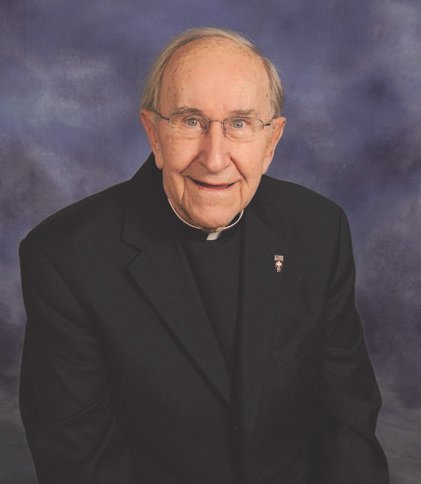 Rev. John Alexander Zabelskas, M.S., who served as the first pastor of Mary Queen Church in Friendswood, Texas died on June 9, 2020. He was 90 years old.

Born August 25, 1929 at Waterbury, Connecticut to Alexander and Anna Melesius Zabelskas, he attended La Sallette Seminary in Ipswich, Massachusetts and was ordained into the priesthood on May 5, 1956 at the La Sallette Shrine Church in Ipswich by Most Reverend Paul Girouard, M.S., D.D.

Once a priest in the Missionaries of Our Lady of La Salette, a religious order dedicated to making known the message of Our Lady of La Salette, Fr. Zabelskas served as the Assistant Prefect of Discipline at the La Sallette Minor Seminary in Jefferson City, Missouri.  In 1957, he became treasurer of the seminary, and in 1958 he was a part-time chaplain at the Algoa Reformatory in Jefferson City.

From 1964 - 1968, Fr. Zabelskas served as director of the Shrine and of the Retreat League in Jefferson City before moving to Houston.  In 1968, he became associate pastor of St. Peter the Apostle Parish in Houston, who was also in care of Mary Queen Mission in Friendswood, which later became a parish. In 1969, he was named the first pastor of Mary Queen Parish.

Fr. Zabelskas left Friendswood in 1975 to become pastor of Our Lady of La Sallette Parish in Berkley, Michigan.  Elected Provincial at the Mary Queen Province in St. Louis, Missouri, he served two three-year terms from 1979 - 1985, returning to Texas after his second term to serve as pastor at St. Patrick Parish in Lufkin.

In 1990, Fr. Zabelskas moved back to Friendswood where he became the director of Province Development-At-Large until he was appointed administrator pro-tem at St. Jude Thaddeus Catholic Church in Highlands.  He became pastor of the parish in 1994 and served until 2011. Under his administration, a monument in memory of helpless victims of abortion was donated and placed between the church and the rectory by the Knights of Columbus.  He also served two terms as dean of the Diocesan Eastern Deanery.

Fr. Zabelskas was preceded in death by his parents and his three sisters: Ann Gyba, Stacia Yeshinskas, and Helen Zabelskas, and is survived by his nephew, Howard J. Gyba of Narragansett, Rhode Island, and numerous cousins in Lithuania.

A Mass of Christian Burial will be celebrated at 11:00 a.m., with a recitation of the Holy Rosary at 10:00 a.m., on Tuesday, June 16, 2020 at Mary Queen Catholic Church, 606 Cedarwood Dr. in Friendswood, Texas.  Daniel Cardinal DiNardo will serve as the main celebrant and Fr. Skip Negley, M.S., as the homilist.  To RSVP for the funeral Mass, please click here or visit the Mary Queen Catholic Church website at www.maryqueencatholicchurch.org.

The Rite of Committal will immediately follow at Mt. Olivet Cemetery in Dickinson, Texas.

Share Your Memory of
Rev. John
Upload Your Memory View All Memories
Be the first to upload a memory!
Share A Memory
Plant a Tree