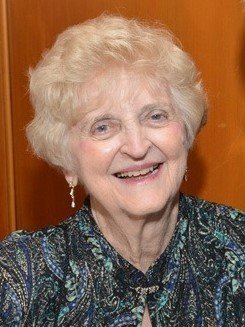 Sylvia V. Richards passed away on Friday, September 7th, 2018. She was born in Houston on October 28, 1932, to MacRobinson and Eleanor Van Valkenburgh. She and sister Marilyn spent their early years in the Heights and later moved to Southgate where her father designed and built a home for the family.

Her summers in youth were spent at camp on the north fork of the Guadalupe river. The Texas Hill country was always a place that made her heart happy. It spawned a lifelong passion for the outdoors, camping, hiking and canoeing.

Sylvia attended high school at Lamar, where she made close friends that she kept throughout her life. She also met her husband William C. (Bill) Richards whom she married shortly after high school. Their first child, Rex William Richards was born in Houston, and they moved to California with the Navy shortly thereafter.  While in California, Deanna Lacey Richards was born, and once Bill’s Navy days were over they moved back to Houston to be with the grandparents.

She moved to California to complete a PHD in Psychology from Union Graduate School, at a time when it was difficult for women in doctoral programs to make headway in a male dominated field. Her persistence paid off, as she found her passion for serving as a mental health professional, supporting and encouraging personal growth. She then returned to Texas where her heart would always remain.

Sylvia always lived on faith. She made her choices based on how she could best serve others. In her younger days she helped out people in low income housing, and later in life she volunteered her counseling services to Katrina survivors in the Astrodome.

Community was foundational in her life choices. She belonged to, or created, so many meaningful community settings, among which were her MDPC group, Hearthfolk, Seekers, her women’s group and her wonderful church community. She spent over 20 years in the First Congregational Church community serving as Minister of Counseling where she recently retired at 85.

Sylvia was a lifelong learner and books were her constant companions. She often sought out the authors and connected with the ones that she felt were kindred spirits. This brought her to live and work for a while at a clinic in Bad Herenalb Germany. Her strong independence made the world her home, and she traveled often to attend enriching workshops around the country.

Sylvia is survived by her son Rex William Richards and his husband David Greer, her daughter Lacey Richards Telge, her husband Glen, and their son Trenton Alan Telge, her niece Andrea and husband David Engle, her nephew Peter Castles and his wife Pamela and their daughters Kate and Elissa.

The memorial service will be held at First Congregational Church, 10840 Beinhorn Rd., Houston, Texas, at 3:00 p.m. on Sunday the 16th of September. Memorial donations may be made to the church.

We send her our love on the mystery of her next journey.