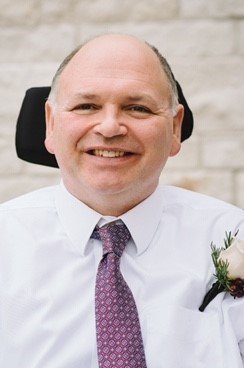 Paul Quentin Clark, 55, passed away on May 7, 2020.  He was born in Lemmon, South Dakota on May 13, 1964 to Francis and Mary Helen (Kari) Clark.  Paul was baptized on May 24, 1964 at St. James Church in Drew, South Dakota.  Paul was the youngest of five boys and also had a younger sister.  After growing up in Bison, South Dakota, he received his mechanical engineering degree from South Dakota School of Mines & Technology.

After receiving his degree, Paul moved to the Dallas–Fort Worth area to begin his career.  On a night out with friends at Billy Bob’s Texas, he met Andrea Christensen. After dating three months, they were engaged to be married.  They married on March 23, 1991 at St. Ann Catholic Parish in Coppell, Texas. In November 1992, Paul and Andrea had a son, Andrew.

Paul’s work took the young family to Livonia, Michigan as Paul started a 23-year career with TransCanada Pipeline.  In April 1997, the Clarks had another son, John. During his time in Michigan, Paul was actively involved with his family and the community, including church, choir, soccer, and Boy Scouts.

After 14 years in Michigan, Paul’s work took his family back to Texas—this time, to Houston. As a member of the Prince of Peace Catholic Community, he looked forward to singing in the traditional choir each week.  On the weekends, he did yard work (which he loved) and helped with high school band and Scouting activities.  He also developed a love of genealogy research.  Paul was immensely proud of his family and loved watching his boys become men.  He delighted in being Pops to his granddaughter and was looking forward to meeting her little sister, due this summer.

Paul was preceded in death by his parents and grandparents, and his father-in-law, Robert Christensen.

A visitation with the family will begin at 6:00 p.m., with a recitation of the Holy Rosary at 7:00 p.m., on Monday, May 18, 2020.  A Mass of Christian Burial will be celebrated at 10:30 a.m., Tuesday, May 19, 2020.  All services will take place at Prince of Peace Catholic Community, 19222 Tomball Parkway in Cypress, Texas.  Paul will be laid to rest at Memorial Oaks Cemetery in Houston, Texas.  The family has asked that masks be worn and social distancing measures be respected at all times.

Donations may be made in Paul’s memory to The Dennis Sehorn Foundation (www.als-sehorn.org) or The ALS Association of Texas (www.ALStexas.org/donate).

The family gives special thanks to the ALS Clinic Team at the Baylor College of Medicine and his primary caregiver, Cynthia Ross.

Share Your Memory of
Paul
Upload Your Memory View All Memories
Be the first to upload a memory!