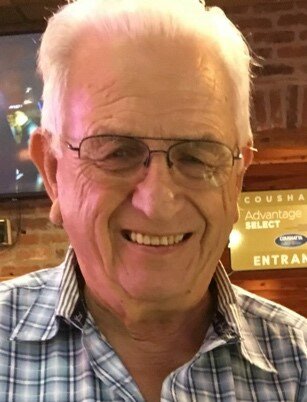 A gentle, kind, loving, all-around people person known as Ed, Edziu, Pops, Papa, Grandpa O, Fishing Buddy, Papa Smurf was an extraordinary man with a lot of friends. Anyone would become instant friends with Ed because of his love of life and nature of human kindness. Edward Ernest Okonski, Sr. left his family and friends to "go home” on April 9, 2022, leaving behind a legacy of charity and volunteering in the Christian community around Knights of Columbus activities.

Ed was born on March 28, 1933, in Bremond, Texas to Edward and Helen Okonski. He graduated from Bremond High School in 1951. He played guard on the football team and won district in 1950. After high school he moved to the big city, Houston, and began his career in the financial industry. Ed worked at Gulfgate State Bank and then First City Bank from 1956-1991 starting out in Item Processing and promoting his way up to a VP over Vault Services. As with many in the financial services industry, Ed found himself changing careers after a layoff and joined a real estate management company, Tramco, where he worked another 25 years, until he retired all together.

Ed shared his love for and taught his sons the art of barbecuing. At many a family gathering, he would be around the pit, mastering BBQ chicken. Ed also had a love for catching crappie and wade fishing in the Gulf. As a member of the Knights of Columbus Council 2917, Ed served as various officer positions and was instrumental in organizing several fund raisers. For many years he was the Treasurer for the Home Association and kept accurate records and never missed a statement. He also enjoyed bowling in the KC league, and traveled with other bowlers to State and International Tournaments and was the State champions in doubles in 1999 with his son, Sam.  He was awarded Knight of the Month and Family of the Month on several occasions and eventually in 2021, Ed was awarded Knight of the Year.

Ed was preceded in death by his parents, Edward L. Okonski and Helen Okonski, and son, Edward E. Okonski, Jr.

A special thanks goes out to the family and friends of Ed.

For those desiring, donations may be made in memory of Ed Okonski to the Knights of Columbus, Coucil 2917, 607 East Whitney Drive, Houston, Texas 77022.

Share Your Memory of
Edward
Upload Your Memory View All Memories
Be the first to upload a memory!
Share A Memory